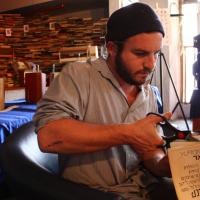 Ariel Resnikoff, poet, scholar, translator, editor and educator, completed his PhD in Comparative Literature and Literary Theory at the University of Pennsylvania in 2019. His research and teaching focuses on Hebrew, Yiddish, and English multilingual Jewish literatures, translingual (language-crossing) poetries and poetics, Global Modernisms, Diaspora Studies, Genocide Studies and Translation Studies. His most recent works include Ten-Four: Poems, Translations, Variations (Operating System 2015), with Jerome Rothenberg, and Between Shades (Materialist Press 2014). Unnatural Bird Migrator, which the poet-critic Jake Marmer has described as "Deep Ashkenazi Voodoo," is forthcoming. Ariel's writing has been translated into Russian, French, Spanish and German, and has appeared or is forthcoming in Jacket2, Golden Handcuffs Review, Full Stop Quarterly, Tinge Magazine and The Wolf Magazine for Poetry. A long excerpt of his dissertation, Home Tongue Earthquake: The Radical Afterlives of Yiddishland, recently came out in German translation in Schreibheft, Zeitschrift für Literatur, and another excerpt is forthcoming in Hebrew translation this spring 2020. With Stephen Ross, he is at work on the first critical bilingual edition of Mikhl Likht’s modernist Yiddish long poem, Processions; and with Lilach Lachman and Gabriel Levin, he is translating into English the collected writings of the translingual-Hebrew poet, Avot Yeshurun. Ariel is a reviews editor at Jacket2 and a founding editor of the journal and print-archive Supplement, co-published by the Materialist Press, Kelly Writers House and the Creative Writing Program at the University of Pennsylvania (2015-present). He has taught courses on multilingual diasporic literatures at the Center for Programs in Contemporary Writing (UPenn) and at BINA: The Jewish Movement for Social Change. Ariel is currently a Posen Foundation Postdoctoral Fellow in Secular Jewish Studies and Pedagogy. He lives on Alameda Island in the San Francisco Bay Area with his wife, the artist and landscape architect, Rivka Weinstock.

Copyright © 2020 The Trustees of the University of Pennsylvania
Penn Weblogin